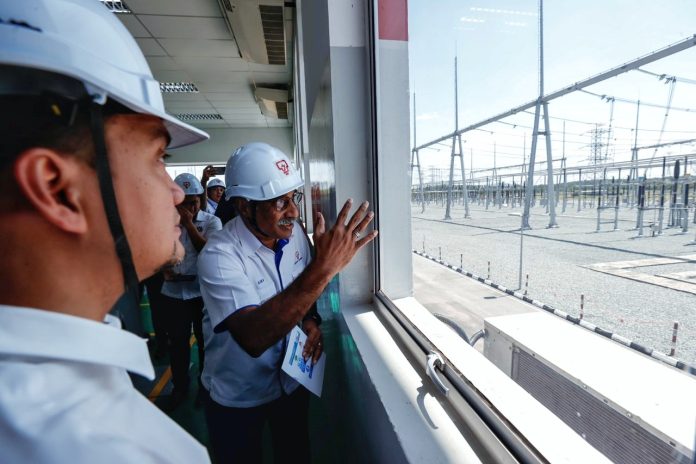 TNB has built the Sedenak Main Input Substation (PMU) in an effort to strengthen the supply of electricity to the Sedenak Technology Valley, especially the hub of the International Data Center, Sedenak Tech Park (STeP), Johor.

The Sedenak PMU construction work with a project cost of RM68 million was completed in August 2019 to support Johor state economic development activities covering the Sedenak, Kulai, and Nusajaya areas. In addition, TNB also spent an additional cost of RM 1.2 Million to carry out installation upgrade works to supply electricity to the Bridge Data Center in September.

“I am grateful to TNB for always being the backbone and supporting the development of foreign investment in the state of Johor,” he said during his technical visit with some Johor State Exco to PMU Sedenak on October 20.

TNB hastened the upgrade of PMU Sedenak which has been operating since 2019 in conjunction with its commitment to Environment, Social and Governance (ESG) in responding to the state government’s initiative to stimulate the growth of nearby industrial areas and international data centers.

Thus, PMU Sedenak is expected to be a catalyst for the aspirations of the Johor State Government to accelerate the progress of the 7,290-acre Sedenak Technology Valley, which includes STeP as a key component of its growth.

STeP, which has the full support of the Malaysian Digital Economy Corporation (MDEC) and is being developed on an area of ​​745 acres, will become the second data hub in Malaysia after Cyberjaya. It is expected to generate RM17 billion in investment value and create more than 8,700 job opportunities by becoming a major alternative data hub in Southeast Asia.

According to Dev Anandan, Sedenak’s 275/132kV PMU has already supplied electricity to consumers, commercial and industrial including the newest customer at the data hub, Bridge Data Center (BDC) which is a subsidiary of the leading information center in China, Chindata Group.

He said, this PMU upgrading project is classified as critical, high impact and fast track project in order to ensure that the needs of data hub customers in SteP are met, stable and hopeful. It was implemented by two main contractors, namely GMO Cables Sdn. Bhd. and Auconpro Engineering Sdn. Bhd.

‘This PMU Sedenak is able to cover the current needs of electricity supply and TNB plans to strengthen it with upgrade projects to increase the ability of PMU Sedenak to supply electricity in the future.SUMBER businesstoday