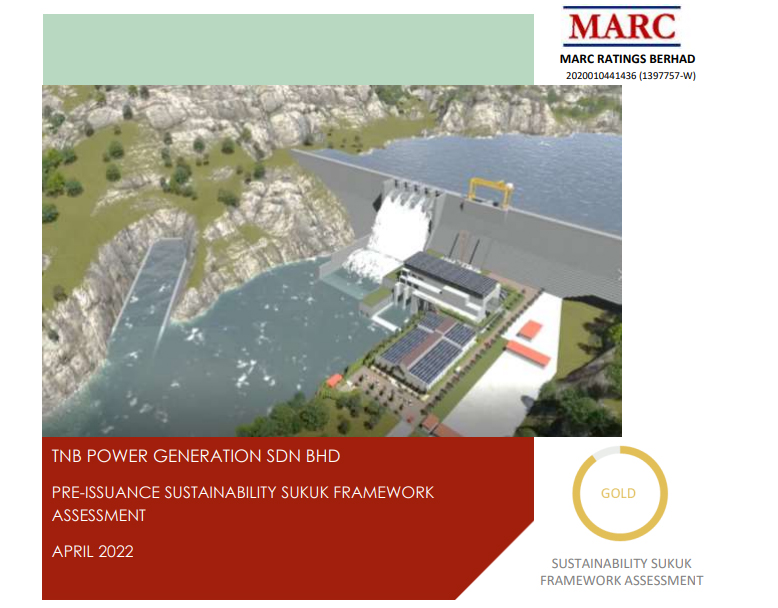 TPGSB, a wholly-owned subsidiary of Malaysia’s largest electricity utility Tenaga Nasional Berhad (TNB), is proposing to issue a Sustainability Sukuk to exclusively finance and/or refinance loans obtained to finance the development costs of an identified Eligible Project, in full or in part. The Eligible Project, known as the Nenggiri Hydroelectric Project is a 300MW hydroelectric power project located in the district of Gua Musang, Kelantan which will be undertaken by TPGSB’s wholly-owned subsidiary, TNBPG Hydro Nenggiri Sdn Bhd (THNSB or Project Company).

The Eligible Project has the potential to provide clear environmental and/or social benefits which have been assessed and clearly described by the Issuer in the Framework. MARC is of the opinion that the Nenggiri Hydroelectric Project is consistent with the main sustainability issues within the electricity generation sector and will contribute to national sustainable development goals and national climate change priorities on the mitigation and adaptation with respect to reducing emissions and improving resilience to climate impacts. In particular, the project will help reduce the carbon intensity of energy supplied by the national grid as well as the economy, in addition to allowing the State of Kelantan to better cope with climate change impacts including floods. The Nenggiri Hydroelectric Project is expected to make an impactful contribution to Malaysia’s energy transition plan of increasing the renewable energy’s share of the country’s power capacity mix to 40% by- 2035. The Nenggiri Dam will also contribute to flood risk mitigation during the monsoon season on top of providing clean water supply as well as raw water supply for irrigation.

The Gold rating assessment is supported by MARC’s qualitative assessment on the issuer’s approach to identifying and managing the environmental and social (E&S) risks associated with the Eligible Project. The project’s potential E&S effects also appear to have been sufficiently considered alongside economic aspects in its feasibility and impact assessments, detailed design, Environmental Management Plans (EMPs) and Wildlife Management Plan (WMP). This, along with TNB’s historical track record in E&S impact management and the utility’s effectiveness in applying the risk mitigation hierarchy to large hydroelectric power projects provide a moderate to high level of assurance of THNSB’s prospective management of Nenggiri Hydroelectric Project’s E&S risks. We consider this to be integral to develop and manage an environmentally, socially and economically sound hydropower project (HPP), particularly one that has a perceptible impact on sensitive locations, including forestland, areas of archaeological or cultural significance, and indigenous settlements.

The governance and the process for the evaluation and selection of Nenggiri Hydroelectric Project and the project’s environmental sustainability and social objectives are clearly communicated in the Framework within the context of TPGSB’s and corporate parent TNB’s overarching efforts to lead the energy transition sustainably. MARC is of the view that the process for the management of proceeds is clearly defined and is in line with market practice. The reporting processes and commitments appear to be good, covering both the funds allocation and the E&S impact of the Eligible Project.

The full Sustainability Sukuk Assessment can be accessed here.